Our music group members have been enjoying learning new songs for the planned show later in the year.

We have been encouraging a new member to build up her confidence to look at the when singing. She is very shy, but gradually starting to face the other members. This is preparing for the show, when there will be different people in the audience. Over the weeks she is now starting to face the group:

Another member who needs the aid of a walking frame, was finding it difficult to hold the microphone and hold onto the frame whilst singing. By using the microphone stand she can enjoy singing without mobility worries.

The members have been learning to play tunes on the keyboard. They are using coloured stickers to help them follow the tunes shown in photos below. The member is very pleased he learning the tune by himself. His support worker, who he needed at first, could now sit away from him in the last photo below.

Again, in the photos below, our member who has mobility difficulties, is having a go at playing the keyboard with the help of her support worker showing her the colours. She enjoyed it very much, as this was the first time she had had the opportunity to use a keyboard.

In the first photo below, the member is gaining in social skills and confidence in his singing, and being encouraged by his support worker. The other member who the group are encouraging to face them whilst singing, is having a go on the keyboard too. As she saw the others playing, it helped her to try it in the second photo below.

The group are helping each other to build their confidence and social skills. By introducing different instruments, it gives them choices in what they like playing, and what they want to do in the coming show.

In the photo, this member was happy using a tambourine. Using his fingers to grip an instrument is another way to help dexterity in his hands and fingers, as when playing the keyboard.

In the first photo below 1007, our members who have walking/standing difficulties are being supported whilst dancing for a short time. This is giving them a sense of achievement and being part of the group. The last photo show group dancing.

Encouraging members dancing and moving to their favourite music, is giving them the opportunity to express themselves. In the photos below, this member had been watching another dancing and wanted to copy his moves at tuning around. She was so pleased that she did that move herself without anyone prompting her. It was a surprise for everyone , and lovely to see how her confidence is improving.

Over the weeks we have been trying something new, to see if our members like it. We have been encouraging a little musical dramatization.

When singing, they are being encouraged to use their arms to act out the lyrics. In photo on the right, when she sings ‘it’s raining’, she raises her arms/hands to demonstrate/show raining.

In photos below he is singing about a train, and doing the actions of driving a steam train. Putting coal on and sounding the whistle. 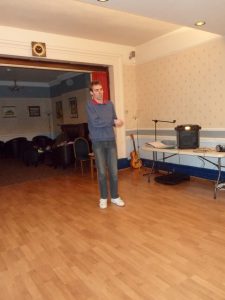 All our members like doing this, and each week the group are learning different actions to their favourite songs. This dramatization is encouraging their self expression/communication skills. It is something now the group is looking toward expanding, and starting another session later in the year to help our members develop in that area.

The music group is giving them the opportunity to try different instruments and make their own music. Being part of a team and working towards the show, is letting them choose what they want to do, and including all their different talents, and expressing themselves.